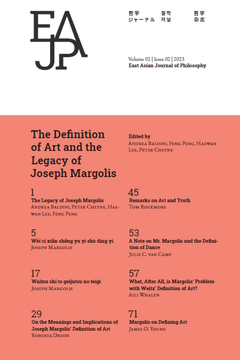 The Definition of Art and the Legacy of Joseph Margolis

1In 1958, Joseph Margolis’s “Mr. Weitz and the Definition of Art” appeared on the pages of Philosophical Studies. This article was one of his earliest contributions to the field of aesthetics, which he will significantly shape until his passing in 2021. It was also his first take on the definition of art – a theme that he will continue to address repeatedly during the rest of his career.

2In that essay, Margolis approaches the issue of art demarcation by critically engaging with a milestone in “analytic” philosophy of art: Morris Weitz’s “The Role of Theory in Aesthetics.” Some of the objections that Margolis moved against Weitz’s view have become standard replies against anti-essentialism. And yet, their origin is often ignored – especially among younger generations of aestheticians.

3This special issue of EAJP wants to celebrate the memory of Margolis by paying a tribute to his seminal contribution on the definition of art, while at the same time prompting further philosophical debate on that theme. In order to do so, we will publish for the first time Chinese, Japanese, and Korean translations of Margolis’s paper. This in turn will serve EAJP mission to build bridges between different philosophical and geographical traditions.

4In addition, for this thematic issue, we seek papers that are not mere commentaries on Margolis’s article, but that push forward in some original ways the discussion on the definition of art.

5The submission language is English. See EAJP webpage for the complete set of instructions. Submissions that do not comply with these instructions will not be taken into consideration. All submissions will undergo a double-blind review process.

6In this EAJP Thematic Issue, all articles must focus on at least one specific theoretical issue, and must present it in a way which is accessible also to readers who are not familiar with the language, or the specific tradition of the case. EAJP is looking for original, previously unpublished research articles that contribute to the development of the field, initiate a relevant scholarly debate, or take part in current discussions on the definition of art. Submissions of research articles should be no longer than around 8,000 words in total, including bibliography. An abstract of max. 500 words, a list of 5-7 keywords, and a short author bio of max. 500 words should be included.

7Deadline for submitting papers to the editors: 30 August 2022 (submissions@eajp.online)